Today sees the publication of Attend, the debut novel by West Camel that has been the talk of the community. And I’m delighted to have West staffing the Secret Library today. Born and bred in South London, West worked as an editor in higher education and business before turning his attention to the arts and publishing. He was editor at Dalkey Archive Press, where he edited the Best European Fiction 2015 anthology, before moving to new press Orenda Books just after its launch. 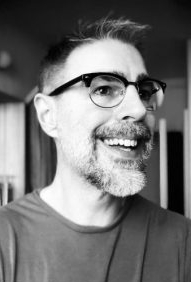 West currently combines his work as editor at Orenda Books with writing and editing a wide range of material for various arts organisations. He has also written several short scripts, which have been produced in London’s fringe theatres. Here are his picks, though I must warn you that we have slightly bent the rules on this occasion…

The Search Warrant by Patrick Modiano

Patrick Modiano won the Nobel Prize for Literature in 2014, and it was then that I first delved into his work. And I loved what I found – highly literary novels, mostly about postwar France struggling to rebuild itself and processing the German occupation.

In his Nobel acceptance speech Modiano said that he’d been trying to write the same book over and over for the past forty years. And when I read The Search Warrant I felt he’d finally reached his goal.

Called Dora Bruder in French, this semi-autobiographical novel sees the author trying to discover the fate of a young woman who went missing fifty years before, in occupied Paris. His quest leads him to his own family’s history, to the holocaust, and to the complicity in those horrors France deals with to this day. A devastating book.

Get The Search Warrant here.

I am an unashamed worshipper at the altar of Virginia Woolf. I have read her novels, essays, short stories, diaries … everything! Her writing, for me, stands head and shoulders above the rest – and yes, I do mean above James Joyce and Marcel Proust, whose ground-breaking novels were published within years of her own innovative books and are often compared to hers – and in many circles considered superior.

On one day in 1920s London, Clarissa Dalloway, a society lady, wanders the town, preparing for a party at her house that evening, while musing on her life. At the same time, shell-shocked war veteran Septimus Smith hallucinates about his own experiences. We will discover that Clarissa and Septimus are connected – but not until the ‘the middle of my party’. A book about life, and what it means to live. Mandatory reading for all humans.

The Bird Tribunal by Agnes Ravatn

I have to confess to an interest here: I edited The Bird Tribunal as part of my work for Orenda Books. However, it’s such an impressive novel, I brush all qualms aside and recommend it with impunity.

A short book, The Bird Tribunal nevertheless manages to be many things at once: an intense, claustrophobic psychological thriller; a deeply insightful study of a relationship; a reflection on the nature of revenge; an investigation into how differently modern women and modern men are treated in the wake of a scandal.

The true brilliance of this book is the way Agnes (I know her as Agnes – not bragging) incorporates all this into a plot in which almost nothing happens. A woman takes a job as housekeeper for a surly man at his remote cabin on the banks of a Norwegian fjord. She cooks, she cleans, she gardens…and she draws ever closer to her saturnine employer. Just as she seems trapped in this remote location, so the reader is ensnared by the beauty of Ravatn’s prose. Intense and breathtaking.

Here at Cafe thinking, we loved The Bird Tribunal. Here’s our review.

Get The Bird Tribunal here.

Thanks, West, and happy publication day! From what I’ve heard, Attend is Armistead Maupin comes to Deptford – a place where I’m sure he would have felt at home. You can get Attend here (this, as with all the links, is an affiliate link). As you’d expect, there’s a blog tour, and here are the other stops. Check them out.