Bond 25: time for a wrong to be righted…forever

Whither the Bond franchise, post-Spectre? There has been some debate on – of all places – LinkedIn, following my very late review of Bond 24. It was suggested, by the estimable Jon Sadler, that Bond has run his time. Jon asks what else you could possibly do to the character: a fair question, but one that has been asked so many times before and the franchise has always reinvented itself, if not always creatively successfully. There’s just too much money to be made.

Theory has it that there are just seven types of stories (this link shows them applied to ads) but Bond plots are fewer still. The baddie is trying to gain ultimate power, steal or blackmail, achieve revenge, or drastically reduce the availability of an important resource or mineral. Occasionally, it gets personal, and Bond goes rogue. That’s about it, and it’s why so many plot points get recycled. It became a bit harder when the Soviet Union collapsed but hey! SPECTRE is back – and it’s the return of Blofeld that sparks this request to the producers. 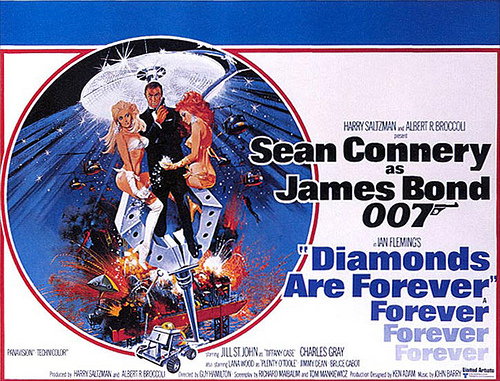 Let’s face it, a couple of good bits aside, Diamonds is rubbish. Connery obviously can’t be bothered. Blofeld returns but is played not by someone who previously played Blofeld, but by someone who was on Bond’s side just two films previously. Wint and Kidd are an anomaly. Tiffany Case is too stupid to be a Bond girl. The moon buggy? Come on. There’s not enough vengeance for Tracy, whom Blofeld (with Irma Bunt) murdered at the end of the previous film. There’s no balance and partly this is because Diamonds viewers aren’t able to see the relationship that Blofeld had destroyed.

But at the end of Spectre, Bond and Madeleine Swann are at the beginning of a relationship. A new Diamonds could explore that, before Blofeld interfered once more. If Broccoli and Wilson can secure Daniel Craig and Léa Seydoux – and we believe Christophe Waltz is available – then you have the junction between On Her Majesty’s Secret Service and Diamonds Are Forever as it should have been done. One of the world’s cinematic wrongs can be repaired just like that.

The main problem as I see it is that Daniel Craig has already had to do a ‘Bond-in-mourning’ film, in Quantum of Solace. But he mistrusted Vesper Lynd – that’s something that he needn’t go through again. A Bond-for-revenge film, if done properly, could help us forget another turkey, Licence to Kill. And more Blofeld can never be a bad thing. If we can keep the best bit of the original film – the Triumph Stag – then what’s not to like?

How about it, Eon Productions?

UPDATE: There have been quite a few comments about this piece on Facebook. I thought I would share this one from Scott Davis, which provides a new way of looking at Licence to Kill in particular:

Diamonds are Forever can be an enjoyable romp once the viewer accepts that it’s not a sequel to On Her Majesty’s Secret Service. It’s a sequel to You Only Live Twice. Meanwhile, Licence to Kill is really the true sequel to OHMSS. The viewer just needs to see Della Leiter as a substitute for Tracy Bond and Franz Sanchez as a replacement for Ernst Blofeld.