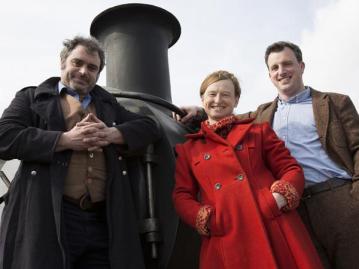 TV programmes offering trains are often to be approached with caution. They range from the truly outstanding (Bombay Railway) to the often-ignorantly polemical (almost anything about Beeching) or to the tangential (travelogue with a vague railway premise – looking at you Portillo). Trainspotting Live was excellent but owed more to the Slow TV movement than to a grounding in rail knowledge. So, although I’ve always enjoyed their programmes and books, I was slightly uneasy that Alex Langlands, Peter Ginn and Ruth Goodman had chosen this subject for their latest six part series. The trio’s previous work has used the farm as its base – indeed we have already enjoyed Victorian Farm.

Ginn, Goodman and Langlands have been doing these shows for over a decade and are historians by profession: they are experienced enough to strike just the right balance between mateyness, story-telling and useful information. The approach is very different from, say, Paul Merton’s Secret Stations which relies on the host’s quick thinking to navigate through some frankly random subject matter. Unlike Merton, they will never appear on Just a Minute – so their historical content has to be spot on.

What they give us is a mix of the well-trodden (railway time), the gentle (mail trains), the slightly unusual (the walk-through tender), the serious (baby farming) and a wider context (the 1851 Great Exhibition and the development of the South Kensington museums). It’s a measure of the group’s skill that this latter content was tied into the premise of the show (the development of a national understanding) rather than becoming a slightly irrelevant extra. Using the show-me-don’t-tell-me philosophy that has worked well in previous series, we see the skill involved in railway staff’s craft. So rather than watch an expert stoke the fire or change tablets, our heroes have a go. They generally succeed, awkwardly, which is the most appealing combination. The overall effect is to provide a railway programme which I could watch and feel I was learning something.

That isn’t to say there weren’t moments when I yelled at the TV. (Of course, these added to the enjoyment.) These yells tended to be aimed towards the voiceover track, and I wonder whether the historians took as much trouble with this as they did with their own individual pieces. There was also an irritating conflation of ‘steam’ and ‘railway’ and a rather jarring reluctance to relate the railway to the present day.

Overall, though, this is a rarity – a rail-related documentary that can be watched by general viewer and gricer alike. And it’s another high-quality addition to the Goodman/Langlands/Ginn stable. Recommended.

Full Steam Ahead is still available on BBC iPlayer