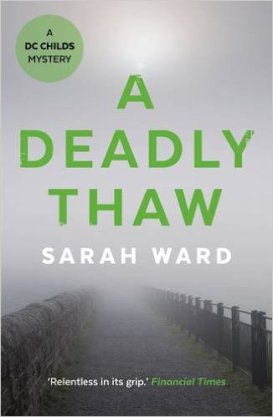 The thing about stories, you see, is that they fuse the ordinary and the extraordinary. A thriller invites you to piece together clues. The links between these clues have to be unusual enough to make the story compelling. But the motivation of the characters tends to be embedded in human truths: love, revenge, resentment, companionship.

The hook for A Deadly Thaw is that a man has been found murdered. Problem is, he was also previously murdered 12 years previously. Pretty extraordinary, and the aftermath of these two murders – and what caused them – makes for compelling reading. The protagonists are attractively ordinary and fallible: dealing with concerns domestic and professional, trying to do their best by the people they care about, trying to heal from events in their life that no one should experience.

The book continues Sarah Ward’s practice – last seen in the pages of In Bitter Chill – of making wider social commentary and giving voice to those denied power. We see how a system that was supposed to provide protection simply did not do so. Ward paints this picture cleverly: ‘the system’ is shown to have improved immeasurably in recent years but the anger inspired in the reader means that they – we – won’t tolerate any reversal in real life. It’s clear that the mistakes of the past have current saliency as those forgotten remain forgotten. This is further underlined by the use of evocative clues – a gun, a photo and a smelly old top – that help the main characters piece together a puzzle of identity and of secrets long but imperfectly buried.

Yet the novel also reminds us of the importance of public services properly focused. Independent action – whether score-settling or to keep loved ones safe – can have horrific consequences. These are themes that should no longer be contentious but recent political developments indicate the points will need to be made again and again.

But – I might have mentioned it already – this is a story. A Deadly Thaw has the mark of a great thriller: it grips your attention and nothing else matters until you find out what happens. Short chapters, most with at least minor cliff-hangers, emphasise the changes in pace heightening the sense of danger and general malevolence. In Connie and Kat we have nicely contrasting female leads. Connie’s development as a character is more measured and gradual, befitting of the main protagonist for this series of thrillers. Kat is shown to be thoughtful and conflicted, though just living in that horrible house she shares with her sister would make me a bundle of nerves. We wish them well but it doesn’t pay to get too sentimental with DC Connie Childs. She’ll have none of that nonsense. And pulsating between the pages is that extraordinary plot.

A Deadly Thaw shows the development of Sarah Ward as a crime writer of note who fuses Nordic Noir and classic Britcrime. I loved it and look forward to the next in the series.