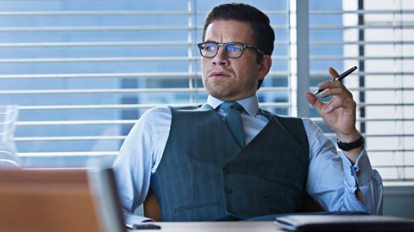 I’m catching up with Follow the Money. No, I’m really catching up. The Danish drama returned for its second series last weekend on BBC FOUR but series one has been taking up valuable real estate on the Sky box for nearly a year. I so wanted to like it and had built it up as a kind of successor to Borgen, written as it was by Jeppe Gjervig Gram who was part of the team that brought us Sidse and the gang. I got about one and a half episodes in and ‘saved it up’. We all know what that means. Eventually, feeling guilty, we select delete and move on.

Except Follow the Money survived, and last week I had another go, in advance of series 2 which started airing at the weekend. Again, I got half-way through the second episode and wondered what I was doing. But by episode 3 I got it, the story has really kicked in and I’m fully engaged. Sorry, Jeppe, but I think the pilot episode was over-complicated and over-ambitious, trying to set up too many characters and generally blundering around. The later episodes are simpler and tighter, with three main narrative strands which I assume will come together at some point. So I am now on episode five and hope to be caught up with series 2 in short order. And, dear reader, you should be watching it too.

Now this is a story about perseverance, and giving a show the benefit of the doubt. I like it when familiarity breeds respect. But this has also made me start thinking about shows and books that we put away for a while, possibly because our environment is wrong for them. I gave up on the first series of The West Wing because Thursdays at 10.00pm didn’t work, but a very thoughtful birthday present of the DVD got me back on track. A hundred pages into Leaving Berlin and I just started again at the beginning. I’m truly glad to have given A Suitable Boy  – probably my favourite novel – a second chance.

One of the great book review cliches is to say that something’s unputdownable. Maybe a stronger recommendation is to have been compelled to pick something up again.

How about you? Any second chances you’re glad to have given?

My Tweets
Join 2,601 other followers