Happy publication day to Stephanie Butland, whose Lost for Words (it’s set in a second hand bookshop; what’s not to love?) is out this morning. Stephanie lives in Northumberland, close to the place where she grew up. She writes in a studio at the bottom of her garden, and loves being close to the sea. She’s thriving after cancer and writing about that subject led to becoming a novelist. We’re delighted to dip into her secret library today.

Here are her choices: 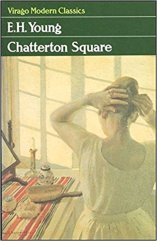 ‘First published by in 1947, this novel by E H Young is set in Upper Radstowe (Bristol) and deals with the lives of two families who live in Chatterton Square. The Blackett family is conventional and straight-laced, headed by pompous Herbert who has very clear views on the inferiority of women. The Fraser household is made up of widowed Rosamund, her five children, and her friend Agnes. The year is 1938, with the Second World War looming and the First World War ever-present in the stories of the characters: Herbert avoided fighting, Rosamund’s husband died, and Piers, Rosamund’s friend, is badly scarred and wears a mask.

‘The joy of this book is in the acute characterisation and spot-on dialogue. With the war on the horizon, in many ways it’s a book about waiting to see what happens next. But it’s also about women deciding what happens to them, in terms of their jobs, friendships, marriages, and sex lives.

The Cherry Ames books by Helen Wells and Julie Tatham 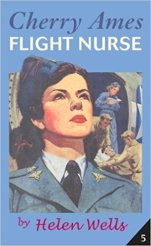 ‘There are 27 of these books which were published in the UK in the 1950s and 1960s and would now be considered YA fiction. (They were published in the US between 1943 and 1968.) Cherry Ames is a nurse who hops from job to job (some examples: Cherry Ames, Flight Nurse, Cherry Ames, Boarding School Nurse and – my favourite – Cherry Ames, Dude Ranch Nurse). She invariably comes upon a mystery or crisis that she solves with a mixture of intelligence and pluck (staunching a few wounds on the way). When I was growing up, my local library had a handful of these books and I loved them. Cherry is clever and brave, and although she gets older she never settles down – she has the occasional beau but she’s a self-sufficient, independent woman.

‘I’m sure if I went back to these I’d find them dated and full of propaganda – the series was used to actively encourage young women into nursing during the Second World War – but I remember them happily as invigorating and fun.’

Amazon UK have loads available, such as these ones for starters.

Gertrude and Claudius by John Updike

‘I’m not sure this is exactly ‘secret’ given Updike’s popularity and reputation, but I’d like to see it in the spotlight! Gertrude and Claudius is to Hamlet what Wide Sargasso Sea is to Jane Eyre: it’s a prequel that explores the back story. Updike takes Shakespeare’s sources (as well as one or two elements of Shakespeare’s play) and tells the story of Gertrude, her husband (who we know from Shakespeare as Old Hamlet), a cold, brutal man, and his brother, Claudius, who is dashing and considerate of Gertrude in a way that her husband is not. All of the things I love about Updike are here: his attention to detail, his way of tracing the development of love and loathing, his ability to weave a story that both satisfies and surprises.’

Updike’s always worth breaking the (not especially well-defined) rules for! Get Gertrude and Claudius here

Thanks Stephanie for your choices and enjoy your day of jubilee today.

Don’t forget to check out Lost for Words (did I mention it’s set in a bookshop (and has had some delightfully uninhibited reviews))?.

You can get it here.

Have you seen the other choices in the series so far? And come back next Thursday as we reveal who’s in (dum dum DUMMMM) the secret library!