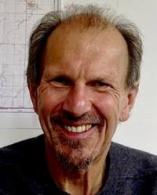 We have a polymath in the stacks today: Phil Rowlands has been an actor, writer and producer for film, TV and radio. He is in development as writer/producer on a movie set in Wales and Canada, and is founder and managing director of the health education organisation Funky Medics, working in India, Europe and the UK. His novel, Siena, is a psychological thriller set in Wales and, er, Siena. He lives in Penarth near Cardiff.

Phil has given us some really interesting choices for the Secret Library so let’s get straight to them. He writes:

In my novel, Siena, I wanted to explore the effects on an ordinary life as it explodes into the extraordinary when the worst thing that could ever happen, happens. Writers I love and learn from, including James Lee Burke, Jeffrey Deaver, Mark Billingham and Kate Atkinson, provide a constant support with their books in my search for truth in my writing and continue to focus and stretch me. However for my Secret Library, I wanted to reflect on three books that at different times in my life moved me and opened my mind to the power of words and stories.

The Tale of the Lazy Dog by Alan Williams

Alan Williams, like Gerald Seymour and others, was a journalist, a foreign correspondent who worked in South East Asia and covered conflicts in many countries. This was the first heist thriller I’d read and the sense of character and story led me into a world far away from a small Welsh town in 1970s Britain. The sense of fading French colonialism and the empathy you had with the colourful and diverse cast of characters in their attempt to steal 1.5 billion dollars in used currency thrilled and excited me. It taught me the importance of strong story, location, pace, colour, dialogue and structure. Eric Ambler and Graham Greene were among his many fans.

Get The Tale of the Lazy Dog here.

Rumer Godden died in 1998 and wrote 60 books, adult, children’s and poetry. Nine of her stories were turned into movies and Black Narcissus, probably the best known, was made in 1947, starring Deborah Kerr and Jean Simmons. She wrote China Court in 1961. I love this book. It came along for me at a time when I was looking for stories to turn into screenplays. I had read an article about her death and started to delve into her life and work. This book is set in a country house in Wales and follows the lives of the Quin family who owned it from the early 1800s to the 1960s. The family had made their fortune out of the local white clay that was needed for the manufacture of porcelain and so named the house China Court. The style of storytelling was what excited me, moving seamlessly from past to present time to give continuity of life to the dynasty that lived or had lived there. It was the first time that I had read a story told from the understanding of an object that was a part of all those who inhabited it over the years. It is a wonderful saga that has passion, love, betrayal, conflict – and a resonance with the two young girls whose lives start and finish the story.

From the Land of Green Ghosts by Pascal Khoo Thwe

I first met Pascal in 1995 and was amazed and humbled by him and his positive and hopeful outlook after a damaged life. This is a wonderful book and is a true story of the spiritual and physical journey of a young man that begins in a small hill town in Burma then crosses borders, cultures and countries and finally returns to where it all began. His book was published in 2002. Although it is his personal journey, the story has all the elements of a thriller. It is about dire unbelievable conflict and the amazing strength of the human spirit. It is spiritual in his overlying beliefs and those of his culture and adventurous in his escape from the violence of the student uprising of 1988 in Mandalay. His first meeting with an academic, Dr John Casey from Cambridge University, who was briefly visiting Mandalay, was to change his life and take him from the bloody streets there to the battles of the Kerenni rebels on the Thai border. He was wounded and wrote to Casey, back in the UK, for help. Casey returned to rescue him. A few years later Pascal gained entry to Cambridge and got his degree. Twenty years later, he returned to Burma. The writing is an example of the fine balance of light and dark, tragedy and comedy and the agonizing whips of unbelievable pain and resilience. It also is a study in the scope of storytelling that crosses the boundaries of fiction but is, in fact, fact. I hope it has made me a more sensitive and observant writer.

Get From the Land of Green Ghosts here.

Thanks Phil for an intriguing set of titles. Don’t forget, dear reader, to check out Siena and the previous choices in this weekly-ish series.