Today the Secret Library reopens with Doug Johnstone behind the desk. We welcome the blog tour for his highly-rated psychological thriller, Fault Lines. You’ll recall, I hope, that Secret Library involves the nomination of three books that aren’t known as well as they should be. No Agatha Christie here! And I’m intrigued by Doug’s choices: here they are.

This was made into a movie starring Ryan Gosling and Carey Mulligan which no doubt got a fair bit of attention, but I suspect not enough people have read the book. Sallis is a crime writers’ crime writer, much admired within the community but never getting the success his books deserve. This is a perfect and typically understated slice of existential noir par excellence, with the central character, known only as Driver, working as a stunt driver in Hollywood by day and a getaway driver by night. The action is absolutely relentless, but the stripped down musings on the nature of existence and a person’s role within society are just as compelling. Stylistically it’s a perfect example of ‘less is more’, and Sallis does a brilliant job of letting the reader into the inner mind of his protagonist by showing his actions rather than beating the reader over the head with it. Sublime stuff. 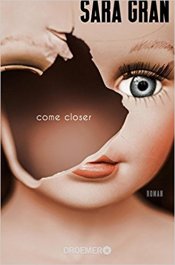 I love all Gran’s books, but this is my favourite, a perfect psychological horror novella that is as explosive as it is uncompromising. The central character Amanda seems to have a steady life, office job, nice boyfriend, good prospects, but then she starts acting up in ways that both she and the reader are surprised by. She begins to think that she might be being targeted by a demon for possession, but it’s never clear whether this is really a supernatural story or just a woman having a complicated breakdown. The downward trajectory of Amanda’s life is absolutely classic, fatalistic noir through and through, yet updated for the modern age. This book is genuinely terrifying and often shocking, but never gratuitous. Similar to Sallis, this is a brilliant example of telling a whole lot of story with so few words, it really is mesmerising and engrossing, and it doesn’t need pages of description and dialogue to do it. Plus the scene where Amanda stubs a cigarette out on her boyfriend’s leg is probably the best thing I have ever read.

They Shoot Horses, Don’t They? by Horace McCoy

I’m a big fan of loads of classic American noir from the 30s and 40s, but a lot of that stuff is really well known. James M. Cain is probably my favourite, but I wanted to flag this up as a really underestimated piece of work. Published in 1935, it is a searing indictment of the Great Depression and the emptiness at the heart of the American dream. The story is told by Robert, who confesses at the start of the book to murder, so it’s more of a whydunnit than a whodunit, which I love. Robert and Gloria are aspiring actors who decide to take part in a dance marathon that ends up running for weeks. These really happened at the time, and McCoy uses this set up to expose the frail psychology of his characters and the hopelessness they feel. Even though you know what’s coming, the end is truly shocking, full of nihilism and despair, but perfectly constructed. When Gloria says to Robert, ‘Let’s go sit and hate a bunch of people’ near the start of the story, the tone is set for a painful but powerful ride.

Get They Shoot Horses, Don’t They? here.

Thanks Doug; what a great bunch to add to your TBR. Don’t forget you can get Fault Lines here, check out the rest of the blog tour (see below) and check in for the next Secret Library which is due up shortly.