All political parties have their comfort zone: the place where no matter what their differences they can still all come together. For Labour it’s the legacy of Attlee and Bevan: the NHS and the Welfare State. For the Tories it’s Churchill. The Liberal Democrats, too, cling to the past but luckily they at least stay in the current century. Britain’s third party clings to Nick Clegg. His are the only events in this conference where there’s a real excitement.

This time last year, Labour were at Brighton. In order to get into the Brighton Centre, you’d walk through a mass of people giving out flyers for their event or selling newspapers. This year, I step slightly to one side so as not to bump into Susan Kramer and Caroline Pidgeon having a catch up in the street.

There’s been a lot of coverage of the Liberal Democrats’ failure to cut a new path. This alongside the press’s obsession with the former foreign secretary’s rampant narcissistic self-promotion and what Labour’s internal debates mean for the long-term control of the party. Brexit is too complicated, too technical, requires the reader (and the journalist) to pay attention, so Sir Vince shrugs his shoulders and throws his hands in the air and says he wants to bring on new ideas and possibly fresh talent. But there are very few people listening, not even in the main hall.

In fairness, it’s a miracle that the Liberal Democrats are still standing. In 2014 they knew a meteor was coming, which gave them a certain fatalist energy. Since then we have had a 2015 relaunch (new leader!), 2016 relaunch (stop Brexit!) and 2017 relaunch (new leader!). There are only so many ways you can do this, especially when your parliamentary party is energetic but too small to achieve cut-through. So instead there are debates about things that Liberal Democrat councillors can relate to, while ignoring the party’s strategic problems and its deepest tragedy which is that in the UK’s immature political system the third party did exactly what a third party is not meant to do – govern – and has not yet been forgiven. 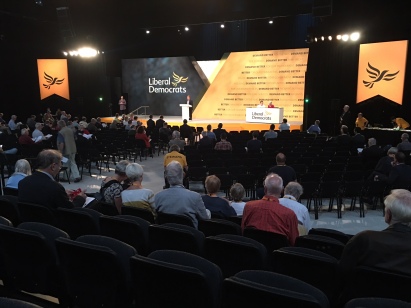 But I think that the Liberal Democrats are weighed down by a further problem: their attempt to be the party of Remain. My sense – and I’d be delighted to be proven wrong – is that their version of Remainia is cultural. They want to appeal to the 48%. They do not see their role as growing the 48%. That means that they have had no need to do the hard yards – as some (though not enough) in Labour are doing – to understand why some people had so little confidence in the political system as to want to blow the whole thing up and to provide a vision of ‘take back control’ (but within the European Union) that goes beyond the empty promises of the Brexiters.

If there is a gap for the politically homeless of the centre, it will be filled only when someone gets up and builds the house: doing the hard work and forging a coherent analysis and plan. Remain lost, in part, because those who fought for it didn’t have a positive, overarching vision for the future. It isn’t enough to be right about Brexit. It is necessary, though not sufficient, for the Liberal Democrats to be right about Remain.

My Tweets
Join 2,634 other subscribers