Today the Secret Library is staffed by Johana Gustawsson as part of the blog tour for the French Noir thriller Block 46 which is published on 15 May. I say French Noir but the settings include Falkenberg in Sweden, London, and most chillingly of all, Buchenwald. The book introduces the professional partnership of Emily Roy and Alexis Castells and we understand that we’ll be meeting them again in due course. Previously, Johana co-authored the French best-seller, On se retrouvera, the TV adaptation of which attracted over 7 million viewers. We’ll be delighted for 7 million views here at the Secret Library but in the meantime, welcome to Johana and here are her selections:

Cyrano de Bergerac is a play in verse written in the late nineteenth century by Edmond Rostand, which actually introduced the French word ‘panache’ to the English language. We follow Cyrano de Bergerac, a remarkable poet and duelist, blessed with a unusually large nose, who is convinced that his ugliness would prevent him from gaining the heart of Roxane, the woman he loves secretly. I was 11 when I read Cyrano for the first time. A boy in our acting class was given the most famous monologue of the play, about Cyrano’s gigantic nose. Those verses really amazed me: it was the most poetic, brilliant, passionate yet funny monologue I had ever heard! When I finished reading the whole play, I was totally taken away by it; the poetry of the verses was outstandingly beautiful. If you do not want to read it all, just have a look at the nose monologue and Roxane’s kiss scene: they are sublime.

The Ice People by René Barjavel

I was holidaying in my grandparents’ farm, in the French Alps, and I was looking for another book to read in the library when I found The Ice People. Written by French René Barjavel, it was a science-fiction novel published in 1968, and the original title in French was The Night of Time. Despite the fact that I was not really keen on science fiction, I decided to give it a try… and I couldn’t stop reading until I finished it! It tells the story of a scientific expedition that finds a lost world, which had been buried into the ice for 900,000 years. It also tells the love story of Eléa and Païkan, two of the members of that lost civilization. It is a gripping book that makes you travel in time with Eléa, a character who has stayed with me until now.

Get The Ice People here.

The Long Voyage by Jorge Semprún

My maternal grandfather, who was a proud Spaniard, offered me this book when I was a teenager, telling me that this novel written by Spanish celebrated author Jorge Semprún, would teach me something about courage. It took me a long time before opening it, almost twenty years, as I only read it when I was doing the research for Block 46. The Long Voyage tells the story of Jorge Semprún’s deportation to Buchenwald concentration camp. A recollection of those terrifying and atrocious years when the author was, like my paternal grandfather, enduring the Nazi barbarity. Beautifully written despite the atrocity of the story, The Long Voyage still haunts me.

Get The Long Voyage here.

Thanks to Johana for sharing these choices. You can pre-order Block 46 here and don’t forget to check out the other participants in the blog tour. 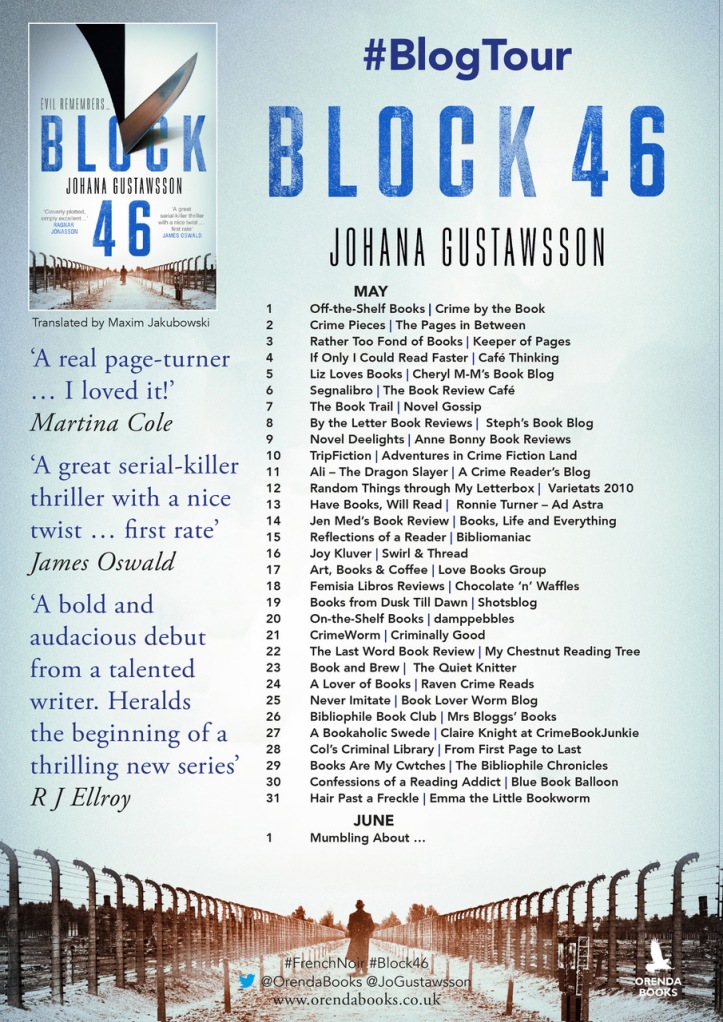