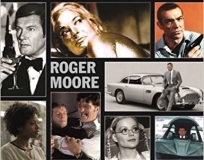 There’s been an outpouring of tributes over the last week to the late Roger Moore. The affection in which he was held stretched far beyond the Bond community. If James Bond is a national icon, Moore was a national treasure in his own right.

Curiously, though, Roger Moore’s reputation has led to a misremembering of the way in which Moore played Bond and Moore himself has probably done more than anyone to reinforce the myth that he was little other than a gentleman in a safari suit. The beginning of Bond on Bond (a retrospective by Sir Roger) is a case in point: Moore says that he clung to the idea that Bond didn’t enjoy killing (based on a random sentence he found in an Ian Fleming text), and this insight was at the heart of the way in which he filled the role. But it’s important to remember that Moore’s Bond is a capable of a sadistic killing as of a quizzical eyebrow raise. Bond’s a complex character; the unsavoury parts of his psyche are important in understanding him, and there is no point in glossing over that.

Perhaps it isn’t fair to demand detailed analysis from what is essentially a glossy romp down memory lane. But there is enough in the pages of Bond on Bond to make you consider the nature of Bond’s longevity as a cultural symbol. Moore mentions the debates at the end of the 1960s about whether Bond was likely to continue. What he doesn’t say – perhaps doesn’t need to say – is that his own tenure in the role and his interpretation of the part were absolutely instrumental in keeping the series going. Without Moore’s relaxed and elastic interpretation it’s hard to think of a way in which the series could have continued to reinvent itself to remain culturally relevant, with its nods to both Blaxploitation and Star Wars.

The worst thing about Bond on Bond is its title: it’s cute and clever but ultimately this book is written in the tone of Moore, not Bond. Moore supplies some excellent, funny and revealing episodes from his own life and from the set – but for every moment of snark there’s a balance with two or three pieces of self-deprecation: a quality not known within the Bond charm armoury. We can’t help but find this pleasant and agreeable, but at first I also find it irritating, because Bond has tension and edge and I think that even in retirement there would be some regret.

But of the three first actors to play Bond (Dalton and those who came after are still working actors and are less visible on the Bond fan circuit), it is Moore who has come to terms with the role. Unlike Connery, and especially the tortured Lazenby, Moore is at peace both with his choices and his character. His approach to the fandom has always been to acknowledge that he played a part that thousands would have liked and that millions enjoyed the movies he made. His jokes are bad but we really don’t care. He respects the role and rejoices in the life it gave him. I wonder whether a secret agent called James Bond would have found similar peace in retirement. I’ve always assumed not – thinking the loss of Tracy and/or Vesper would be too great – but Moore at least raises the question.

Once I got over my hand-wringing about the title, I realised just how good this book really is. We are presented with a greatest hits package as slick as a Maurice Binder title sequence and with as much class and confidence as a Barry soundtrack. Lavishly produced and with the run of the Eon photo library, it’s a treat. Two hundred pages of entertainment. Our attention is fully engaged, we nod, we enthuse, and we put the book down a few hours later having had a great time. Bond on Bond encapsulates what the late, great Roger Moore was all about.

Get Bond on Bond here.