We’re joined today by Glen Ebisch, man of mystery and philosophy. The mystery comes from his twenty or so novels, first for young adults then for adults. The philosophy is from his decades spent teaching and studying the subject in the States. His books touch a little on this expertise. His latest book, The Accident – published in the UK by the innovative Williams and Whiting – tells the tale of a straightforward search which turns out to be less simple than it should.Here are his choices:

In Our Time by Ernest Hemingway 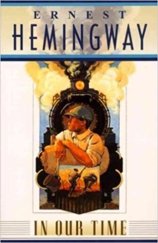 Most people would probably agree that the early Hemingway is the best Hemingway, and this is a very early book of short stories and vignettes written when he was still heavily under the influence of his time as a journalist. I came upon this volume when I started my university studies, and it quickly impressed upon me how much could be communicated with very few words, an important lesson to be learned if you tend to be in love with language.

The stories are topical. Many relate to semi-biographical events in Hemmingway’s life during the period of World War I; some go back to his experiences during boyhood. There is manliness about them, but none of the posturing that would come to mar his later work. The violence is there, but Nick Adams, Hemingway’s stand-in, doesn’t face it with false heroics but with a brave sensitivity. This is a good place to start reading Hemingway, and a good way to learn how to write.

The Moving Target by Ross MacDonald

The Moving Target was published in 1949, but I came to it in the nineteen-seventies when I discovered MacDonald’s work. Influenced by Chandler and Hammett, he dared to bring an intellectual sophistication and sensitivity to the character of the private eye that was lacking in his predecessors. He also structured plots which are often classical in nature, involving family secrets that come back to haunt the present.

Although literary novelists revered Macdonald during his lifetime, current views are more mixed. Some feel that his detective, Lew Archer, comes off as being pompous and preachy. Others resent the fact that MacDonald seems to be trying to transcend the category of genre fiction, and become a literary novelist himself. Whether these criticisms are valid, the reader will have to decide. But I think that by creating a detective who was more than a tough guy with a gun, he broke new ground for the development of the hard-boiled detective mystery and for the role of the sleuth in general.

Some books you expect to provide relaxation with a basic enjoyable read. The Nero Wolfe novels consistently do that. The finely developed characters of Nero Wolfe, the overweight, sedentary detective, and Archie Goodwin, his lively assistant, are always a pleasure to visit, and the plots prove to be challenging but play fair with the reader.

I think it is this nice balance between well-developed characters and a satisfying plot that most influenced me in my thinking about the mystery. Many writers from the so-called golden age of crime writing focused primarily on plot to the exclusion of creating memorable characters. Currently, we sometimes have detectives whose personal lives and past traumas often intrude into the story at the expense of plot. What reading Stout teaches us is that there must be a balance to tell an enjoyable story.

Thank you Glen for a thought-provoking selection. Now, dear reader, check out The Accident and do please let us know your thoughts on Glen’s choices in the comments below.