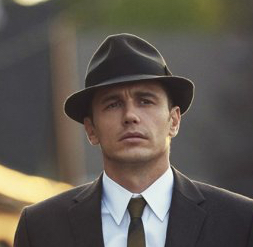 What would it be like to turn back time? It’s a story telling device we’ve seen so many times but 11.22.63, based on the novel by Stephen King applies it to one of the most notorious moments in recent history: the assassination of President John F Kennedy.

This eight part mini-series involves teacher Jake Epping (James Franco) persuaded to travel through a portal that takes him back to 1960. Epping has to shadow Lee Harvey Oswald, work out if he is really going to shoot JFK and stop him. Epping has to build a life to enable him to survive through until 1963 and, inevitably, this involves complications that get in the way of his mission.

I’m not familiar with the work of Stephen King, and I enjoyed this drama. Fans of films such as Inception and even TV’s Primeval will find much to savour.

It did feel, especially at first, that we were in a very rich role-playing computer game. At times Epping kicks up against the boundaries of the game world; at a more mundane level you’re aware that he has been set a task to complete and failure to get a clue or find a piece of information could lead to ‘game over’. There’s a strange concept of ‘the past’ acting as though a sentient being which involves things being put in the way of Epping or the other characters. This concept is introduced fairly early on and as a result we wonder whether key characters have been introduced to trip up Epping. There’s an incident about two thirds of the way through the film in which it appears as though ‘the past’ might or might not also act benignly which is bewildering. It’s both liberating and exhausting to creep through a world in which our usual ideas of reality have been replaced by others, especially given that we’re in the middle of one of the most disputed assassination stories.

The pace of the series is slow at times, especially at the beginning. That has the intended effect of making us realise just how difficult it must be for Epping to settle down in ’sixties America. Al, Epping’s friend who has set him up for the task, has been to and fro through the portal and gives him top tips and a handy dossier, but who reads the instructions before starting a game? As the series progresses, the pace quickens and we meet other characters and we realise that Epping’s mission might actually have direct effects both on Oswald’s activities but also the wider environment, starting many ripples of change.

One of the pleasurable features is that we can try to predict the outcome of Epping’s mission? Does he succeed? And whether he succeeds or not, what are the ramifications? The ramifications are not really adequately expressed (Epping speaks to relatively few people before drawing his own conclusions) though the story itself comes to a satisfying ending which makes us think about the influence we have on the lives around us.

There’s a noir feel throughout and a sense of melancholy as well as impending disaster. The cars are absolutely amazing, and there’s perhaps enough reference to the Civil Rights issues that would become more important in the 1960s and since. Get through the first two episodes and you’ll want to watch the rest. The quirky rules of the Epping universe will remain with you.