No is not enough, by Naomi Klein – book review 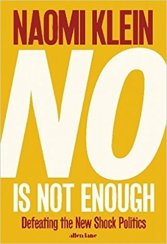 I found No is not enough frustrating at times, but it is worth persisting with. Naomi Klein’s best work occurs when she creates an argument illustrated with fresh, compelling evidence. No Logo, for example, which was right about the emerging gig economy even if it drew the wrong conclusions about whether brands could be called to account, contains vivid stories which I remember a decade and a half later. This book may or may not have the same sticking power, but it is nothing if not ambitious.

Klein begins No is not enough by applying the analytical framework she has developed in her previous books to Donald Trump’s development of his brand. There is some useful insight: for example Klein notes that Trump’s TV experience enabled him to differentiate between being the best ‘contestant’ for the presidency rather than the best ‘candidate’. Similarly (although this is not a new thought) Trump understands the need to provide fresh spectacle (on wrestling entertainment principles), knowing that policy specifics are no longer adequately examined by the popular media.

Part of Klein’s central argument is that, monstrous though Trump and his senior team may be, it is not enough to want to return to the Obama years as thought they were some kind of golden age, especially with regards to the environment. She describes the horrific deterioration of the Great Barrier Reef. Things need to be better than Obama gave us, and better than Hillary Clinton promised, she says. Klein is, shall we say, unenthusiastic about the Democratic 2016 nominee for the presidency, and backs up her unenthusiasm and this is a reasonable position to take. But although Klein argues that to have voted for Trump takes the voter into a dubious moral area, she does (later) argue that Bernie Sanders would have been a more electable candidate and she hurls the ‘neoliberal’ tag at the parts of the Democratic party that didn’t back Bernie. I find that this veers a bit towards a Boris Johnson-like cake-and-eat-it position, even if Klein – unlike many of the new left – does take care to spell out a working definition of neoliberalism.

So about half way through the book, I’m finding myself angered about Trump (and let’s face it, to be angered about Trump is a daily occurrence even if Klein provides material that is new to me) and also irritated about an ideological purity that sees the centre and left of centre as too decadent to be part of a solution. It’s the promise of the blueprint of change that keeps me going at that point.

The section on shock tactics by anti-democratic forces provides useful detail on the role of Mike Pence among conservative thought leaders, and reminds us that for all Trump’s unfitness for office, his preening inadequacies probably shield the world from an equally ideological, but potentially competent administration.

And I find Klein especially strong and compelling when she warns that the notion of a shared humanity, with everyone regarded of equal status, with equal rights and deserving of equal dignity, is under threat from a ‘dominance-based logic that treats so many people…as disposable.’

But it begins to look as though Klein is proposing protest, resistance and solidarity as the answer, as though these are new and of themselves sufficient. She is right to suggest that renewal comes from outside the party system (that works both ways: remember the Tea Party and the alt-right) – but doesn’t deal with the messy stakeholder jostling which inevitably arises. The atmosphere within the ‘Leap’ movement sounds ideal and but also idealistic and unrealistic. Who is to judge whose needs take precedence, or who is more legitimate or representative of the ‘real’ citizen? We’re just a few small steps from Matthew d’Ancona and the ‘marketplace of ideas’. Klein herself makes statements about who might be the ‘right’ owner of energy sources, citing ‘farmers’ as an example – a class that ranges from the smallholder to Big Agriculture.

The ideas put forward in the Leap are very interesting, especially the proposal to redefine what is meant by a ‘green job’ and the rejection of blind nostalgia is very appealing in Brexit Britain; but some of the specific proposals seem small, especially when compared against Klein’s own, inspiring call to think creatively about a new vision. And as those proposals are adopted by parties and integrated into a policy framework it’s possible that some of the shine will be tarnished by compromise.

This book is at its best when it is analysing what has gone wrong and kicks us to get off the mat. It is weaker on realistic answers and that’s fair enough because they need to come from all of us. No is not enough is not enough. But it’s a start.

Get No is not enough here.

Thanks to Penguin Books for the review copy.