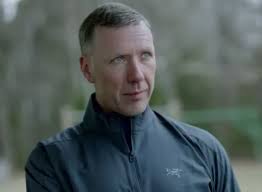 Room 302 is episode 27 of the Beck series, but in many ways it marks a new direction for Stockholm’s favourite grumpy detective. New writers, a new – less space-age – set, new members of the team and a gorgeous but somewhat anonymous title sequence, tell us that there’s plenty of road left to run.

We meet Klas Fredén, the new boss, and no device is spared in showing us just what a dastardly character he is. He doesn’t shake Oskar’s hand! He picks up salad in the canteen with his hands and then tosses it back! He checks his phone during meetings! He incites a riot and then pretends it was all Martin’s idea. He’s already trying to play Beck and Gunvald off against each other but they see through him.

Jenny Bodén and Ayda Cetin are the other new members of the team: solid, no-nonsense and reliable. The male/female ratio is improved, and Gunvald seems to treat them as human beings, but we can’t help but compare these two slightly dull women against strong characters of old, such as Margareta Oberg or Alice Levander. (We also seem to have lost a bit of the buzz that came from minor and non-speaking characters around the office as there are fewer extras to be seen.)

What with all this excitement it’s perhaps understandable that the strongest moments occur within the team itself: Klas asserting his authority, Oskar’s continuing awkwardness (he appears to have matured not one jot during the considerable gap between episodes 26 and 27), and we have some time to explore the enigma of Gunvald Larsson: he is more multi-dimensional than usual. He brings the classical references, and he – uncharacteristically – cautions against Klas’s tin pot idea to storm into an estate and to send a highly visible police crew into an area which is easy for a gang to defend against such crew. He gives us a racist remark though I wonder if it is meant (as well as setting up an ignorant comment from Oskar) as a complaint (by the writers) against Sweden’s monocultural CID. There is a marvellous moment between Gunvald and Oskar – a set piece possible only because of the unisex toilets. And there’s an odd and unconvincing vignette at the end which is meant to question whether Martin (and by implication Gunvald) have unsatisfying lives away from the crime squad. More seriously, Gunvald provides excellent advice to his niece about the party scene she is on the periphery of. The small speech in which he reminds his niece that the victim did not deserve the crimes against her is on its own worth the price of admission.

Sadly, his is one of very few moments where the episode demonstrates its moral core and takes a stand. This is a shame because the plot could have lent itself to a real exploration into the culture of entitlement by Stockholm’s ‘rich brats’ – what it meant to be in that materialistic and hedonistic set and what it meant to be within its orbit, particularly if you were prepared to pay what seems to have been a very high price of admission. With this BBC FOUR repeat screening in a week when the revelations about predatory behaviour in the film industry, an exploration of such behaviour would have been timely and useful.

I can’t agree with the argument that the Beck films don’t have a soul, but it exists in its characters and not in its depiction of or challenge to Swedish society. An episode such as this, which dials up its character development, while showing very little interest in the issues that its plot throws up, makes this contrast all the clearer, and can feel quite clinical and this is both odd and unforutunate, as Room 302 is an episode with lots to recommend it. Perhaps things will settle down when the new team have got their feet under the desk.

Find all our Beck coverage here.

My Tweets
Join 2,634 other subscribers