The Man Who Died, by Antti Tuomainen – book review

Before reading The Man Who Died, I carefully avoid reading anyone else’s review. But I know that Antti Tuomainen’s latest novel has had an amazing reception. Having read and enjoyed The Mine, my expectations are high, but from the news release accompanying my review copy I’m expecting something a bit farcical and perhaps reminiscent of Tom Sharpe. In fact, as I read the book I find myself worrying that I’m not getting some of the references. I cling ridiculously to the one I do get – the mention of the Ballad of Lucy Jordan. Jordan was 37. Jaakko Kaunismaa is 37. Is he Lucy Jordan? Is that what this is all about? Ridiculous though it sounds, this will give you a sense of the way in which Tuomainen rips out all the certainties, both for his characters and his readers.

We know right from the start that Kaunismaa has been poisoned, probably deliberately, and we are with Kaunismaa as he quickly comes to realise that not only are there few people he can trust, but that he has active enemies. Indeed, the phrase ‘life comes at you fast’ can have been written for this character. He is sustained by scoops of ice cream, an heroic Coca-Cola habit and the potential of a relationship with a colleague.

The book is written in the first person and that can be a little confusing at times. Kaunismaa likes lists and occasionally presents them, but while he is a detailed and extremely witty narrator, with an excellent command of bathos (well delivered by translator David Hackston), he doesn’t present his current thinking about his suspicions. As a result, it’s as though he has placed a barrier between himself and his audience. He doesn’t necessarily trust us any more than the other characters, and he is keeping information in reserve. Yet some of the most affecting passages in the book are when he is musing on the nature of his forthcoming death and what he feels it should mean both to him and to others.

Curiously, given the adventures that befall Kaunismaa, it’s a comment that he makes about another character that gives a clue to the real heart of the book, which is far removed from some of the blackly comic set pieces. Jaakko has crashed a business dinner:

Ilari, the man familiar from reception and one of the most valiant warriors in the battle against the world’s printers, appears from the kitchen.

We’ve met Ilari before and he does indeed battle against the office printer, which has a mind of its own. But the comment here brings into sharp focus what I felt was a major theme of the book: that when a person reviews their life, a large chunk of it will lie among the mundane and ephemeral. Most of the people we identify as Kaunismaa’s enemies don’t really hate him, he’s just either in the way or not contributing to their achieving their plans. At times Jaakko is literally fighting for his life and yet the thing he wants to protect most of all is his mushroom business, even though he doesn’t know (or at least doesn’t want to share with us) what long-term plans he might have for it.

It is, of course, through his business that he expects to enact revenge on those who have betrayed him and also, indirectly to redefine his life’s meaning. By the end he is, as he puts it, while narrating what could be described as a personal and professional stand-off,

a synthesis of sugar, caffeine, adrenaline, love, anger and the profound, holy indignation I feel in attempting to defend a respectable mushroom business

The Man Who Died is rollicking entertainment, but it is more than that. In Kaunismaa, Antti Tuomainen creates a character whose charisma peeps over his middle-age paunch, and in the story he tells, we experience laughter hiding behind sadness, and uncertainty crouching alongside a beaming smile. All human life is here. Until it isn’t.

You can get The Man Who Died here (affiliate link).

Thanks to Orenda Books for the review copy. We are taking part in the blog tour for The Man Who Died so do check out what other people had to say: 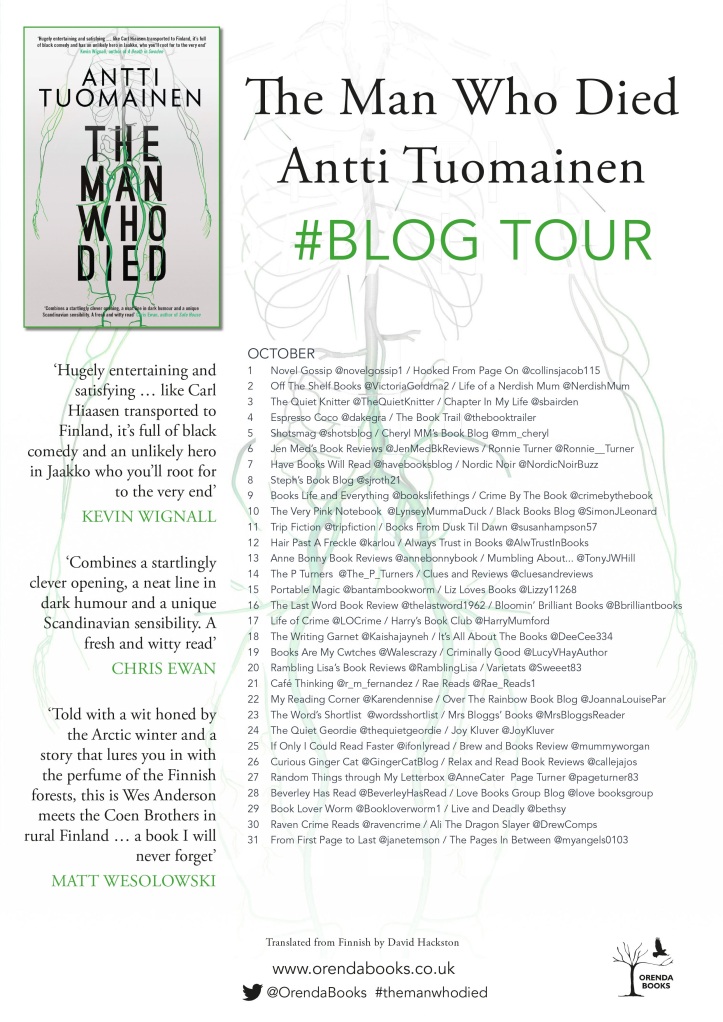