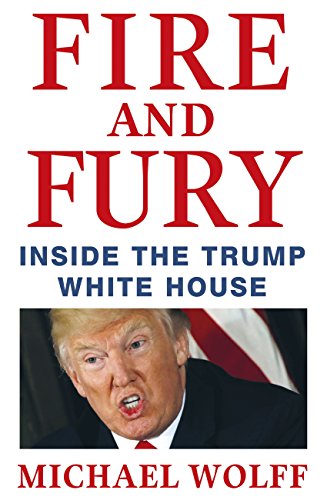 Fire and Fury is a frustrating and puzzling book. It manages to be both breathless and a bit of a slog, and contains lots of what seem at first glance to be devastating insights but which dissolve to froth. It is full of titbits that seem tasty but which are ultimately unfulfilling. There are so many pages that I have folded down, to refer to when writing this review, which on reinspection provide nothing of value.

This is a book quite unlike previous political commentaries, such as the recent, UK-based,  Fall Out, by Tim Shipman.

Michael Wolff does not especially attempt to sift, to evaluate, to synthesise. His approach is as a recorder, not a reporter. He is interested in the players, and the tensions between them. But the tensions are largely personal, at least as he presents them. ‘Jarvanka’ and Bannon have quite different motivations, but Wolff is not prepared to explore those that might exist outside personal ambition, at the same time as he gets sniffy about Trump’s inability to imagine what might make a public servant tick. He is quite uninterested in why his characters act as they do. They glitter – or at least, they inhabit a world where they ought to be able to glitter – and although Wolff is quite clear that the individuals concerned are in his eyes rather second rate, he is also happy to share the expletive-laden gossip while giving you the impression he disapproves.

Wolff’s problem is that – as he points out – the Trump White House leaks in real time. There are plenty of other sources that have provided us with the news that Donald Trump is not a philosopher king. To be fair, Wolff is quite good at laying out two tensions in Trump’s personality: the lens of the salesman through which he views any relationship, and his desperation to be liked which sits uneasily with what seem to be some pretty unlikeable attributes. Wolff is also happiest when he is dealing with Trump’s relationship with the media. It would have been interesting to have had explored what that really means in terms of public policy – Wolff tells us that Trump sees success in terms of favourable media coverage and felt vindicated in hiring H R McMaster as national security adviser because of McMaster’s solid performance on Morning Joe, even though the president had not wanted to appoint the military man, finding him boring. It’s an anecdote that tells us all we need to know about Donald Trump’s White House.

And I guess that is the issue. Whether an individual piece of information is correct or not is to miss the point. Michael Wolff tells us a story of dysfunction that we know to be largely true. But he does not use his ringside seat to provide real insight. What is Trumpism? What can we do about it? Three hundred pages later, we learn that nobody really knows. It is a tale, while clearly not told by an idiot, that contains not fire but sound and fury. Macbeth had something to say about that.

Get Fire and Fury here.