How to lose a referendum, by Jason Farrell and Paul Goldsmith – book review

I’ve started this review a number of times, but the crux of the matter is this: Britain is stuck. Two years on from the referendum and the first practical plan for a new relationship with the EU has not lasted a week before imploding. Screams from business are getting louder, but a large part of the party of enterprise couldn’t care less. Britain can’t decide on a path forward but this important book shows that we can’t go back either. We have landed in this place because of over sixty years of mismanagement both of the European question but also of our own domestic politics. 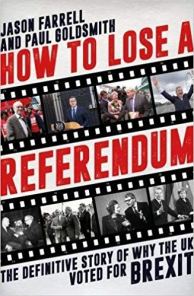 The seeds of the Leave vote were planted in 1950, but successive governments poured on the BabyBio, not the weedkiller. David Cameron then added his own special brand of fertiliser rather than take a scythe to what was becoming a bit of a beanstalk, but he was only the latest in a long line of leaders who had got us to that stage. That’s the conclusion (if not the metaphor) of How to Lose a Referendum, in which no fewer than 18 reasons for Remain’s loss, many dating back decades, are listed. Writers Farrell and Goldsmith provide a largely compelling and sobering analysis, and any Remainer who thinks it would be a simple task to undo the Leave win in a so-called People’s Vote had better think again for the fundamentals have not changed.

The story Farrell and Goldsmith tell is both simple and complex. Since the end of the second world war, the UK’s interests have not always aligned with those of the initial six signatories to the Treaty of Rome. This seems to have tied Britain into knots in knowing how to interact with these crafty foreigners. Britain goes through spasms of not knowing its own objectives, sending the wrong people to the summits (and giving them the wrong instructions), and mixing arrogance with incompetence. The UK doesn’t want to play because it doesn’t want to betray its Commonwealth partners, ignoring that France goes into bat quite happily for its equivalent countries and gets them a good deal.

Even when Britain does make a great contribution to developing the EU’s market and institutions, this role is played down by Europhiles and sceptics alike. It looks as though this happens for party management reasons – Wilson in the 1970s is as concerned by this as Major will be in the 1990s and Cameron in the 2010s. Britain could never treat the EEC/EC/EU as a visionary project (leaving aside what that project could or should be) because the national debate always, always treated it as on one hand a place for zero-sum transactions and on the other a place where battle had to be done to protect British interests from those who would attack them.

As a Remain supporter, I find Farrell and Goldsmith impeccably fair-minded. Indeed, they present the case(s) for Leave in a way that is in some ways convincing (or at least does not collapse under its own contradictions). A particular strength is that they explore the personal without getting side-tracked by personality. Thus they include an interview with Gisela Stuart in which the Vote Leave chair describes herself as someone forced into taking the stance she did because strategic mistakes by David Cameron had left her no alternative. And in exploring the motivations of those who voted to remain in 1975 and to leave in 2016 the writers really add to our understanding of this campaign.

I think they could have added a nineteenth reason, though: a rise in English nationalism that grew from the establishment of devolution and was given an adrenaline shot by the Scottish referendum and its aftermath. We know that people who identified as English before British were likely to vote Leave and the reverse was also true. Cameron stoked this anti-Unionist feeling but the resulting English Votes for English Laws was not widely known or understood and so English resentment continued to grow. The legacy of the Scottish referendum was not only the ability to dismiss warnings of disaster as ‘Project Fear’. We know from elsewhere that Cameron refused to allow Stronger In to develop England-specific messaging which might have helped.

The different spurs for Leave mean that the ‘will of the people’ includes both ardent free traders and libertarians (for whom the death of British manufacturing would be just so much collateral damage), and economic nationalists who successfully appealed to those who had been shamefully left behind. It will be impossible for Theresa May to deliver this ‘will of the people’.

You can get How to lose a referendum: the definitive story of why the UK voted for Brexit here (affiliate link).

Leave a Reply to Unleashing Demons – the inside story of Brexit, by Craig Oliver – book review | Cafe thinking Cancel reply