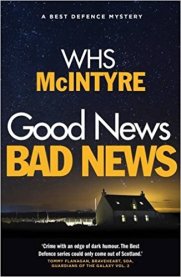 Today we kick off the Good News Bad News blog tour. This is an unearned privilege, as this is the first time I have come across W H S McIntyre’s ‘Best Defence’ series, but the bad news, good news is that I now need to read the seven novels that have already been published.

This is a thriller as pure entertainment, and I loved it. If the best novels get you to think something different about the world – inspire you, make you angry or better understand those around you – McIntyre intrigues with the excellent creation of Robbie Munro.

Munro is the kind of character who would be an unsuccessful, wise-cracking gumshoe in another life. But instead of 1940s LA, he’s making a life in 2010s new town Scotland, as a criminal defence lawyer, and his living is earned in the space between the definitions of law and justice. Quick of wit and fast of metaphor, he makes you think about different kinds of intelligence (this guy is obviously as sharp as the blade of one of the men he represents, but his practice is not obviously booming) – and about that crucial space between law and justice.

I had to look up the meaning of the word ‘picaresque’ which appears on the back cover: it describes Munro accurately as dishonest but appealing. The appeal is set out early with a case that should be ruled as de minimis; only once we are thoroughly charmed and rooting for this lawyer, does his moral stance become more and more ambiguous. His client list seems to include most of the hard men of the Lothians and his nonchalance as to their life-ruining trades of loan sharking and drug dealing are enough to tease our disgust, especially as they become more and more intertwined with a squeaky-ish clean home life. If only he would represent only the virtuous, we think, surely he would be more successful? And surely this man, who is self-aware and capable of reflection, can look around him?

By the time we’re two thirds of the way through the book we have a few instances where a lead in the main mystery opens up, to be closed down immediately because it would implicate one or other of Munro’s criminal contacts, and this is annoying. You might want to stop and think about what that says about the balance of power between the drug industry and the heights of the criminal justice system.

Except, you probably won’t want to stop because the momentum of this novel is simply overwhelming. McIntyre simply delivers one of the twistiest plots. This is one of only two books I’ve read recently (Sarah Ward’s A Deadly Thaw is the other) where my train journey has ended but I’ve had to sit on the platform because I can’t leave the station because I have to know how the book ends. The twists for each of the plot narratives are surprising and logical and rather finely blend the different flavours of the novel: energy mixed with ambiguity and humour.

I’m not sure I’d want to meet Robbie Munro in real life. But I’m glad to have met him in Good News Bad News. The novel’s published later this week. Check it out.

Good News Bad News is out on Thursday, and you can get it here.

Thanks to Sandstone Press for the review copy. And you might like to check out the other blogs taking part in the tour. 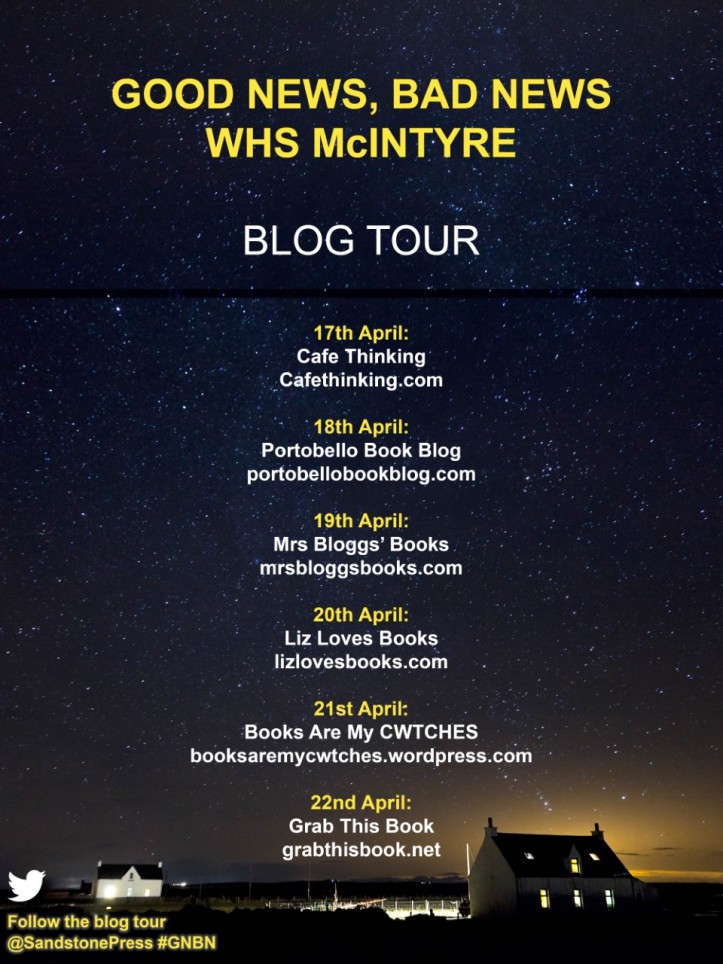